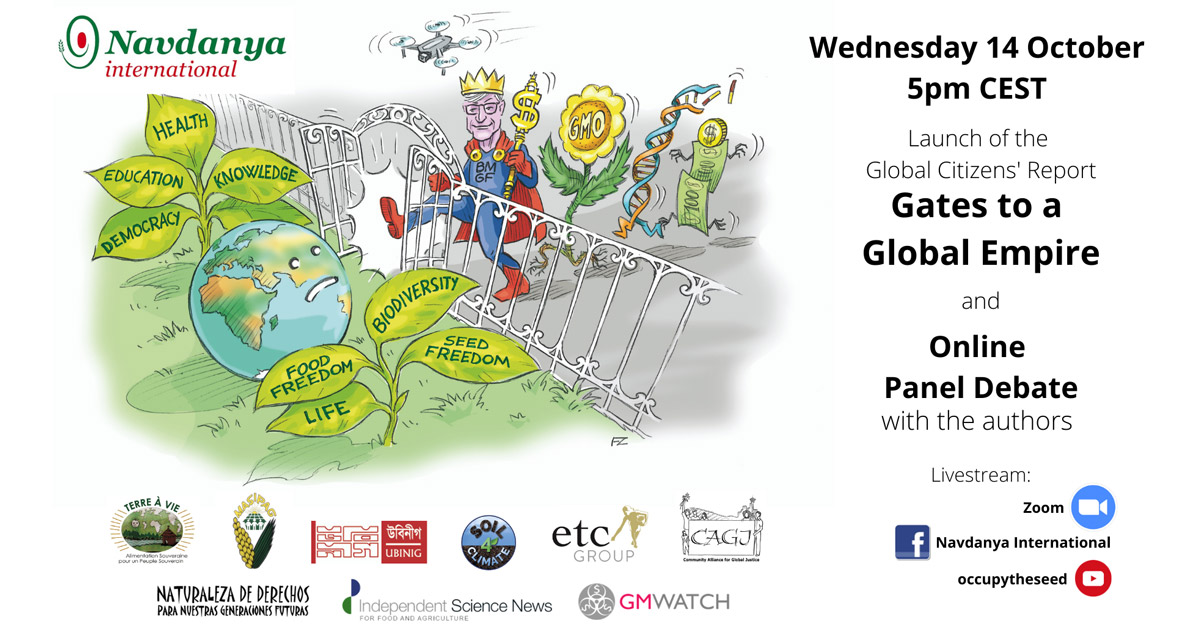 On 14 October 2020, at 5pm CEST, Navdanya International will launch its new Global Citizens’ Report, “Gates to a Global Empire”, which has brought together contributions from civil society leaders and organizations in cross-sectoral fields and testimonials from civil society movements across the world.

A panel of contributing authors, including Farida Akhter, executive director of UBINIG, Bangladesh; Chito Medina, founding member of MASIPAG (Farmers-Scientists Partnership For Development), Philippines; and Claire Robinson of GMWatch will present their contributions to the report through an online Zoom conference, which will also be broadcast live on Navdanya International Facebook Page and event page.

The report gathers evidence and throws light on the dangers of philanthrocapitalism, which is boosting the corporate takeover of our seed, agriculture, food, knowledge and global health systems, manipulating information and eroding our democracies. Over the last 30 years it has emerged as a major force, able to derail the international agenda and push the future of humanity and the planet towards extinction and ecological collapse.

Register in advance for this webinar: http://bit.ly/14OctGTGE

The report shows how the patterns of technocratic solutionism, powered by an unholy alliance between big capital, science and technology institutions and states, are embodied by the Bill and Melinda Gates Foundation and put into accelerated action through philanthropic development. Through its various initiatives, sub-organizations, development schemes and funding mechanisms, the Gates Foundation weaves an intricate web of wide-ranging power and influence, obscured through all its separate strands. The report addresses a large part of this web of power. It shows that the Gates Foundation ignores the past failures of the very technologies it wishes to push and disregards any potential problems its initiatives might yield. Its focus is primarily on profit and market expansion.

Gates to a Global Empire … over Seed, Food, Health, Knowledge and The Earth:
A Global Citizens’ Report, coordinated by Navdanya International