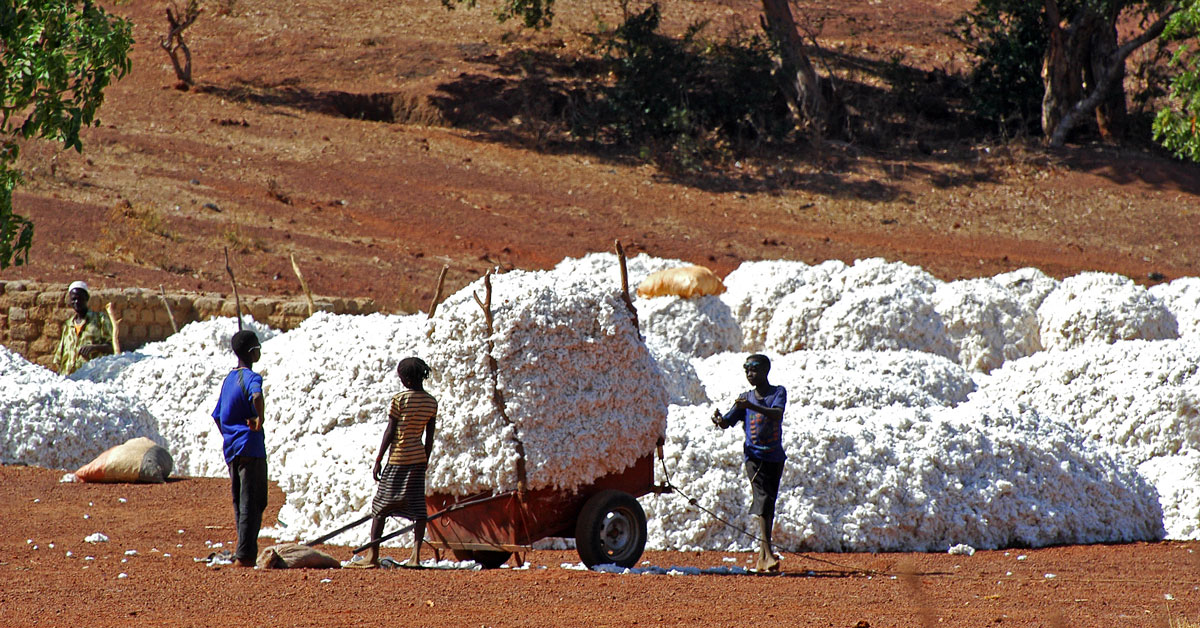 The West African nation of Burkina Faso was once the poster child for genetically modified (GM) crop advocates. Its 2008 adoption of GM cotton for smallholder farmers was hailed as an example of how these technologies could alleviate poverty and food insecurity by protecting crops from pests and increasing yields.

But this much celebrated success story came to an abrupt halt in 2016, when the Burkina Faso government and cotton companies decided to abandon GM cotton.

Burkina Faso was the first African country where a GM crop was principally grown by smallholder farmers. The crop was an insect resistant cotton variety, developed through a partnership with the US-based agri-business company Monsanto (now Bayer Crop Science). At its height nearly 150,000 Burkinabè households grew GM cotton.

Observers were shocked when only eight years later Burkina Faso abandoned genetically modified cotton. The reason: it had shorter-fibre lint and ginning machines extracted proportionally less lint from harvested cotton bolls. This led to US$76 million in losses for cotton companies.

Other problems also surfaced. New evidence showed that GM cotton yields were less than half of early projections. And there were significant variations among farmers. Many farmers lost money.

How could such a prominent success story turn so quickly to failure?

Our new research, which draws on over 250 interviews and in-depth research in Burkina Faso spanning over a decade, traces what happened. We found that rather than an abrupt turnaround, these problems were known by cotton sector officials as early as 2006 – ten years before Burkina Faso abandoned GM cotton.

The puzzle we unravel is how a success narrative could be built when problems were readily apparent.

In short, the story has a lot to do with power.

Burkina Faso’s cotton success narrative was built on a series of studies with significant methodological problems. Studies contained well-documented issues in data collection, failing to sufficiently control for differences between comparison groups. In most cases, they also failed to provide sufficient evidence to evaluate how data were collected.

These faulty evaluation studies reported yield and income results in averages, which advocates quickly circulated as evidence of success. These same studies often showed large variability in yields and profits for farmers, but didn’t highlight these findings.

Significant conflicts of interest shaped the collection and reporting of findings. Monsanto provided funding for the evaluation studies in a contract with the Burkina Faso Institute for Environment and Agricultural Research. This meant that Monsanto had ultimate control over research findings – and a strong interest in projecting success.

In our interviews, which included Monsanto representatives, participants said it was difficult to challenge the success narrative. Concerns they raised were often silenced or left unexamined. At times, their expertise was dismissed.

Evaluation studies had additional problems, particularly with regard to the differential impacts of GM cotton. Previous research in Burkina Faso has detailed how local dynamics can determine the extent to which a farmer profits from cotton production. These dynamics weren’t included in the evaluation studies that built the success narrative.

Our research, which paid close attention to local-level dynamics, revealed that these missing pieces were critical factors shaping farmers’ experiences with GM cotton.

Poorer farmers faced additional challenges: they used less fertiliser, which compounded yield issues in GM cotton, and they were often burdened by having to pay for replacement seeds in cases when their first planting didn’t germinate. This additional seed cost resulted from complex relationships between farmers and cotton company employees who often belittled small-scale farmers. These dynamics and additional costs were invisible to overly narrow evaluation studies.

As a result, the success narrative gave a false impression that even farmers with few resources were achieving “average” yield gains.

Profiting from an exaggerated success narrative

The power to shape a narrative – based on faulty studies that overlooked important realities – turned out to be good for Monsanto’s bottom line. The final royalty contract signed by Monsanto and Burkinabè partners ostensibly gave 28% of the “added value” of GM cotton to Monsanto, and the rest for farmers and cotton companies. But Monsanto received far more than this.

The royalty contract used an inflated yield estimate (30%) to establish the amount of added value from GM cotton. Even in the best years, actual cotton yields didn’t approach this estimate.

Monsanto also received this inflated payment irrespective of the actual performance of the technology, since it was paid according to the number of hectares planted. Monsanto profited more than was agreed to in the contract, and assumed none of the risk shouldered by cotton companies and farmers.

Monsanto also benefited from a reliable GM crop success story. This narrative is still used to advance other ventures in Africa.

Anthropologist Glenn Stone has argued: "We are naïve in swallowing empirical claims without a careful consideration of how vested interests affect the creation of facts."

As this case shows, vested interests played a significant role in shaping a success narrative despite apparent problems.

Moving forward, it will be important to learn from the Burkinabè case, not just about what happened, but about how knowledge was produced. An examination of vested interests is one such take away. This is particularly important now as multiple African nations consider a wide array of GM crops for commercialisation.

Many GM crops under consideration in Africa are not the domain of a big agri-business company like Monsanto. This does not mean, however, that vested interests will not still shape how knowledge about these crops gets produced.

Evaluation studies will need to be independent, transparent, rigorous, and methodologically diverse, to accurately reflect the realities of these crops. Studies must anticipate challenges and shortcomings. This is particularly true to understand whether and how genetically modified crops aid resource-poor, women, and marginalised farmers.

For too long agricultural technologies like GM crops have been evaluated as if they exist in a social and political vacuum. Understanding how GM crops perform for farmers needs close attention to local-level dynamics and context. The role that power plays in that context must be a part of how we understand GM crops moving forward.


This article is republished from The Conversation under a Creative Commons license. Read the original article.

Burkina Faso’s 2008 Bt cotton adoption was Africa’s largest genetically modified (GM) crop introduction principally for small farmers, and became its most celebrated success story. In 2016, however, Burkina Faso announced an abrupt phase-out of Bt cotton, citing millions of dollars of losses due to inferior lint quality. In hindsight, quality issues were conspicuously absent from the success narrative, particularly given that cotton sector actors were aware of problems for a decade. Recent data also reveal significantly lower yield gains and substantial inequalities between farmers, further questioning the success story and the evaluation literature it relied upon. Why and how was such a faulty and incomplete success narrative produced and promoted? To answer this, we draw on extended fieldwork conducted over ten years in Burkina Faso to critically examine how the knowledge used to build this success narrative was produced. We first scrutinize the evaluation literature, pointing out flaws and blindspots in the methodologies and reporting of findings. We then extend our analysis, drawing on political ecology and critical science studies, to focus on the power relations of knowledge production. We focus on three themes and show how (1) the political economic context favored the production of positive results, with Monsanto holding substantial power over the evaluation process, (2) the narrow epistemologies of agronomic evaluation produced “apolitical” knowledge that overlooked how local-level power dynamics shaped data collection, and – in at least two cases (fertilizer application rates and seed costs) – the returns accrued by smaller-scale Bt cotton farmers, (3) the knowledge produced via these processes was used to accrue material benefits to Monsanto and helped to promote GM crops across the continent. We conclude that future GM crop evaluations should be more self-reflexive, critical, and transparent in how power shapes the evaluation process and agricultural outcomes for differentiated farmers.