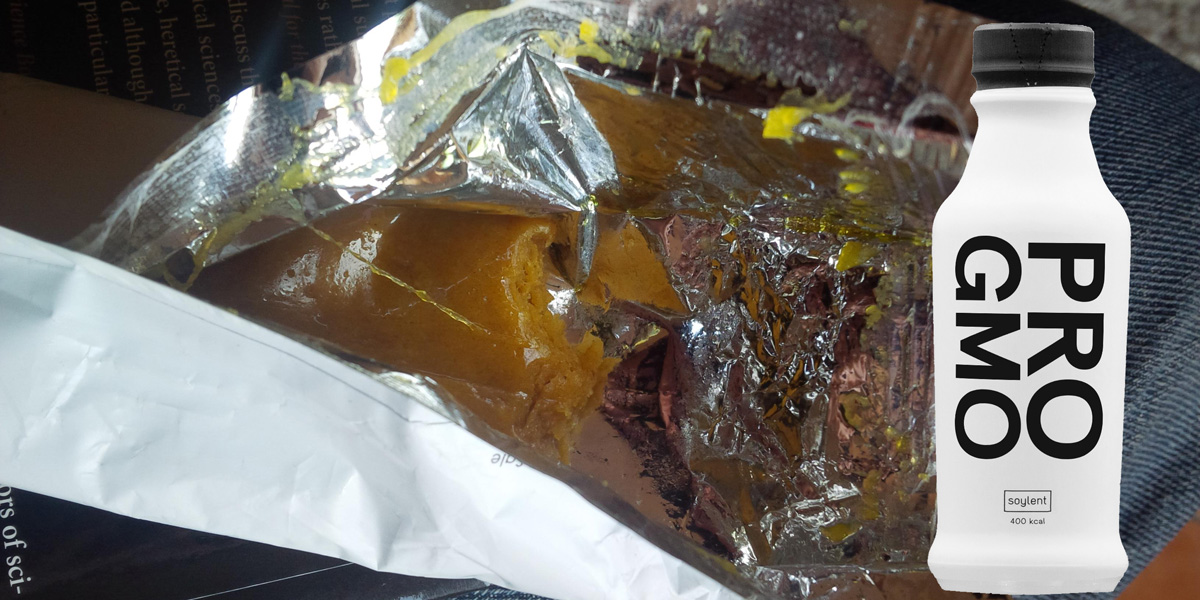 According to the article below, Soylent food bars are making some people sick.

Soylent is a company that promotes its products as “proudly made with GMOs”.

In an article with this title on Soylent’s website, the company uncritically reproduces all the industry’s talking points on GMO safety.

For why these arguments amount to no more than wishful thinking, read GMO Myths and Truths.

The article below focuses on the possibility that “microbiological” hazards, such as yeast, mould, and, presumably, disease-causing bacteria may be affecting the product.

Neither the author of the article nor Soylent seem to have considered the possibility that what’s making people sick are the GMO ingredients. Either the GM crops themselves may be unexpectedly toxic, or the product may contain toxic residues of the herbicides and pesticides the crops are grown with.

For added “yuk” factor, take a look at the pictures above and at the link below, which show “a strange yellow residue” on the inside of the bar’s packaging.
—

Soylent food bars made some people throw up

Since the snack bar’s launch, a small number of users have claimed that they experienced “nausea,” “vomiting,” and/or “diarrhea” after consuming the bar which, according to the company, provides 12.5% of daily nutritional requirements. In a statement to BuzzFeed News, Soylent said that after investigating the complaints, it is “very confident in the safety of the bars.” The company suggests that affected customers consult a doctor before continuing to consume Soylent products.

Some first reports of Soylent bars causing gastro-intestinal distress appeared on the company’s community forum on Sept. 7, 2016 when member “Raylingh” started a discussion thread titled “Nausea and vomiting several times after eating food bars.” The user tracked responses to that post on a spreadsheet , collecting self-reported data that reveals that all 33 members who responded to the thread suffered from nausea, all but one vomited, and just six had diarrhea. Users continue to add comments to the thread, so the number of reported cases is likely to grow. Soylent user CandleKnight reported needing an emergency room for acute food poisoning after eating a Soylent bar. An anonymous user reported to Gizmodo that they also ended up in the emergency room after consuming a Soylent bar.

Other Soylent users on the message board (naten, audevivere, GenesisFoodSolutions, and kragmar, among others) are saying that these reports can’t all be true because a number of things can cause food poisoning and because they themselves have not gotten sick from eating the bars.

In a /r/soylent subbreddit posted on Oct. 5, user pernambuco claimed they had “the worst vomiting episode I ever experienced” after consuming a Soylent Food Bar. The Redditor said the bars consumed had the expiration date of July 14, 2017, which matches the expiry date of bars bought by at least 13 vomiting customers on user Raylingh’s Soylent community spreadsheet.

Redditor TipsFirstStupid, who allegedly drinks Soylent 2.0 every day for breakfast, became “violently ill” with “uncontrollable diarrhea” and “so nauseous I have to puke” after eating the bars.

According to Soylent’s website, the Bar (along with the company’s drink powder, bottled drink, and coffee product) are “Generally Recognized As Safe” by the FDA.

However, according to the FDA’s online inspection database, the facility that produces Soylent Bars, Betty Lou’s in McMinnville, Oregon, has not undergone a Foodborne Biological Hazards inspection since 2014, two years before the Bar was launched. Soylent claims that last FDA inspection was as recent as March 2016. Anyone wishing to file a consumer complaint with the FDA can find the phone number to do so here. The FDA advises anyone having an averse reaction to a product regulated by the FDA to make a complaint.

Sources close to Soylent’s production processes say that the company conducted its own internal review of the Betty Lou facility four months ago. The FDA inspects the facilities, but a third party agency does quality control for the final, finished good.

The sources suggested that the complaints might be due to a sensitivity to sucralose, an artificial non-caloric sweetener commonly found in products like Quest Nutrition Protein Bars and Powerbar Reduced Sugar Bars. There is three times as much Sucralose in Soylent’s bar (about 30 milligrams) compared to the 1.6 version of the company’s drink powder.

In an official statement provided to BuzzFeed News, Soylent said that the number of complaints about its bars represents about .03% of those sold. The bars typically undergo multiple quality control programs for yeast, mold, and other microbacterial testing.

After acquiring boxes from customers who complained, Soylent employees personally consumed the boxes’ remaining bars without effects. At this time, Soylent has no plans to dial back the amount of sucralose in the bar, but may re-formulate in the future.

Here is Soylent’s statement in full:

“We have become aware via our support channels of a limited number of instances of people experiencing indigestion or discomfort following consumption of our Soylent bar. To date the number of complaints we have received represents less than 0.03% of the number of bars we have sold. While this is an extremely small number of complaints, and all packaged and prepared food products have some risk of intolerance, we take every single one very seriously.

The safety and quality of our bars is verified via a comprehensive food industry standard program. First, we exclusively source from qualified suppliers and use only those ingredients that include a certificate of analysis (COA) for rigorous physical, chemical and microbiological criteria. Second, the bars are manufactured at an FDA inspected, GFSI certified facility under a thorough food safety and quality program. Lastly, the bars are subjected to an additional microbiological testing program before being released from the co-manufacturer and sent to our warehouses.

After these reports, we have retrieved remaining bars from our consumers and have personally consumed many of the remaining bars without adverse effects. We have also sent them for further microbiological testing and all tests have come back negative. Based on this we remain very confident in the safety of the bars.

A certain subpopulation of individuals may have an allergy, intolerance or sensitivity to ingredients such as soy and / or sucralose, or certain vitamin and mineral sources and should consult with their doctor before continuing to consume these products.“

UPDATE: A previous version of this story stated that 24 users reported symptoms and appeared in Raylingh’s spreadsheet. Since publication, more users have come forward with their stories. We have updated the number accordingly.