Is the latest study retraction really good news for the GMO lobby? 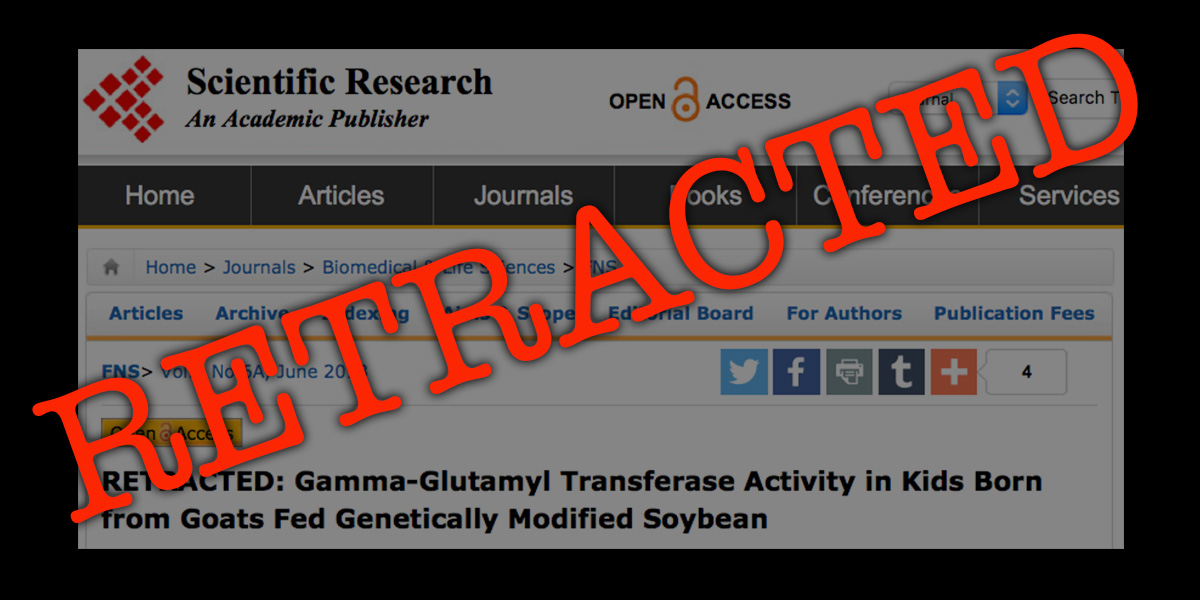 Pro-GMO lobbyists’ delight over the retraction of a study that reported GM DNA in animal tissues is misplaced – and they are silent over data manipulation and retractions of studies by GMO supporters, writes Claire Robinson

An Italian research group that reported the presence of DNA from GM foods in the tissues of animals that consumed them has had one of their papers retracted by the journal that published it.

The paper was authored by a team led by Professor Federico Infascelli at the University of Naples.

The pro-GMO website Biology Fortified greeted the retraction with delight, claiming, “A scandal is erupting that threatens to undermine claims of extraordinary risk from genetically engineered crops.”

The Biology Fortified article says the retraction was on the grounds of “plagiarism”. It goes further than the journal in its accusations against the authors: “Several sources predict that this is just the beginning. Multiple analyses suggest that the group manipulated research results, including potentially fabricated gel images used in papers.”

An article in the journal Nature buys into the allegation of data manipulation, stating, “The leaked findings of an ongoing investigation at the University of Naples in Italy suggest that images in the papers may have been intentionally altered.” The article also notes that the researchers deny any wrongdoing: “The leader of the lab that carried out the work there says that there is no substance to this claim.”

A likely reason for Biology Fortified’s interest in anything that could discredit Infascelli is made clear in its claim that “The papers from this research group have been used extensively to argue in the political sphere that genetically engineered crops are hazardous, including by Dr. Infascelli himself.”

Based on the evidence available so far, however, Biology Fortified’s excitement appears premature. The journal, in its retraction notice, names the reason for retraction as “self-plagiarism… Publishing or attempting to publish substantially the same work more than once.”

The retraction notice goes on to explain that the data in one of the images of the paper came from a previously published paper by some of the same authors, including Infascelli himself.

The journal decided that the authors are guilty only of “honest error” rather than “misconduct”.

And crucially, though unfortunately for Biology Fortified, the journal says that the findings of the paper are “still valid”.

There is never any excuse for fabricating data in a paper. In cases where this is proven, action is required. But despite all the accusations, no independently validated evidence has emerged as yet in the case of the Italian team that this did happen. They have had one paper retracted for image duplication, and Biology Fortified anticipates that more retractions of other related papers by the team could follow.

While the jury is still out on this case, it’s worth noting that double standards may be being applied to papers promoting GM crop technology versus papers pointing to risks. Two pro-GMO scientists were found guilty of manipulating images in their scientific papers – but got off almost scot-free.

The case, reported by Retraction Watch in 2012, concerned a husband-and-wife team of Mexican scientists, Alejandra Bravo and Mario Soberon. Bravo and Soberon were found guilty of “inappropriate and categorically reprehensible manipulation” of images in no less than 11 scientific papers.

The researchers had published the images as evidence for their proposed mode of action for Bt toxins, the insecticidal proteins that GM Bt crops are engineered to express. Bravo and Soberon have at least one patent related to their work. According to a Canadian team of researchers, their actions contributed to the scientific confusion about how GM Bt crops affect insects.

The episode resulted in seven journals agreeing to publish corrections and to Bravo and Soberon resigning from chair positions they held at the National Autonomous University of Mexico. But inexplicably, none of the papers affected by the fake images were retracted.

What is more, just one year after the story broke, Bravo and Soberon’s university reversed its sanctions against them. Two journals accepted their corrections “without further actions”, and one of those journals actually appointed Soberon as editor only a few months later.

It’s tempting to conclude from the opposing outcomes of the somewhat parallel examples of the Italian team and Bravo/Soberon that scientists can sometimes get away with extreme misconduct – but only if they support GM crop technology.

If you detect a whiff of hypocrisy in the air around Biology Fortified’s response to the Italian case, you’d be right. Biology Fortified’s board members include Kevin Folta, the GMO-promoting scientist who was branded a liar by Stacy Malkan of the pro-transparency group US Right To Know in a letter published in Nature Biotechnology.

And an emeritus board member of Biology Fortified is Pam Ronald. She had to retract two of her papers due to errors. The retracted papers formed the core of Ronald’s research on how rice plants detect and resist disease.

There’s a further irony in the source of another aggressive attack on the Italian researchers, posted on the BarfBlog. The author is Doug Powell. Powell was lead researcher on the notorious ‘wormy corn’ study, which claimed that shoppers preferred GM corn to non-GM corn but omitted to mention that above the non-GM corn was a sign saying: "Would you eat wormy sweetcorn?", while above the GM crop was a sign saying, "Quality sweetcorn".

No less than forty scientists called for the paper to be retracted, and Dr Richard Jennings, who lectures on scientific practice at Cambridge University, called it a “flagrant fraud”. But the paper was not retracted.

Revealingly, the Nature article about the Italian researchers’ retracted paper strays far beyond this issue in order to promote the idea that GMOs are safe. The article claims that “food and drug agencies around the world” have carried out their own “numerous safety tests” and have found that “there are no dangers associated with eating GM food”.

In reality, of course, “food and drug agencies” such as the US Food and Drug Administration and the European Food Safety Authority in Europe have no budget or remit to carry out any safety tests of their own on GM foods. Their decisions are based on reviewing the data from the industry’s tests on their own GMOs.

GM DNA in tissues “not controversial”

Finally, far from undermining claims of risk from GM foods, as Biology Fortified hopes, the Italian research “scandal”– if it proves to be anything of the sort – should leave them intact and unscathed.

This is because Infascelli’s team is not the only one to find GM DNA in the tissues of animals that have eaten GM products.

And we shouldn’t be reassured by the word “fragments”. A study by Hungarian researchers showed that meal-derived DNA fragments which are large enough to carry complete genes can avoid degradation in the digestive tract and enter the human circulation system. These stretches of plant DNA were complete enough to enable the researchers to identify the exact plants that the human subjects ate, such as soy, maize, and oilseed rape.

Several years ago we at GMWatch were reprimanded by a government scientist (who was emphatically not anti-GMO) for our naive belief that we still had to ‘prove’ that GM DNA was detectable in the tissues of animals that ate GM feed. This fact, the scientist pointed out, was “not controversial and we have known it for a long time”. The only controversial aspect was whether such GM DNA had any biological effect on animals that was different from the effects of non-GM DNA.

Infascelli’s team has reported adverse effects from GM feed in a paper related to the retracted one. The study concluded that pregnant goats fed on GM soybeans had offspring that grew more slowly and were shorter.

Biology Fortified anticipates that this paper may also be retracted as a result of the investigation into the alleged data manipulation. But even if it is, this is far from the only paper to have found adverse effects on animals fed GM feed.

So Biology Fortified’s claim that the more extreme allegations against Infascelli’s team could undermine concerns about GMO safety looks like wishful thinking. GMO promoters appear to be trying to construct a fantasy in which there is just Infascelli’s work in one corner, while in the other are the “numerous safety tests” showing "no dangers associated with eating GM food” – carried out, as some would have us believe, by “food and drug agencies around the world”!