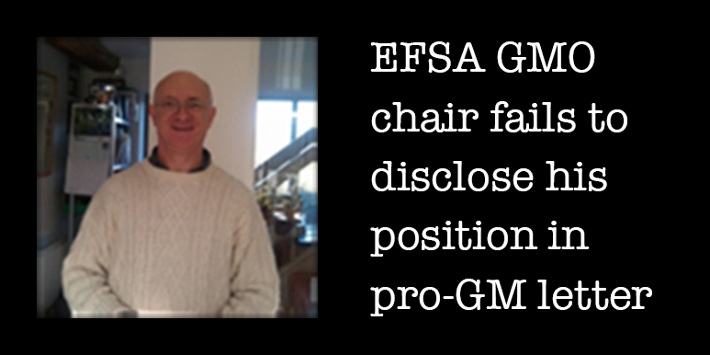 The Independent newspaper concluded its recent pro-GMO series of articles with another piece of misleading hype about the “potential” of GMOs, in the form of a published letter to the editor. The letter scathingly dismissed NGOs’ concerns about the pro-GMO articles as "half-truths”.

No surprise there, you might think, except that the GMO promoter who penned this letter was none other than Joe Perry, the chair of the European Food Safety Authority’s (EFSA) GMO Panel, which assesses the safety of the GMOs submitted for European approval.

EFSA experts are supposed to be independent and neutral, and to act in the public interest. How this squares with Joe Perry’s puff piece for GMOs and his evident antipathy to GMO critics is a reasonable question.

Perry neatly sidestepped that question however, by failing to disclose his EFSA role, instead describing his affiliation as "University of Greenwich", though he appears to be only a visiting professor there.

His position at EFSA was pointed out by NGOs and academics in a letter (item 1) to The Independent, which the paper chose not to publish. Perhaps The Independent felt its readers might be concerned to discover that the man charged with heading up the EU panel ensuring GMO food safety would fail to disclose his role when penning GMO promotionals.

Incidentally, this is not the first time that Perry has written to the press in terms that suggest a wariness of NGOs. In a letter to The Guardian in 2003, Perry quoted the "co-founder of Greenpeace", as Patrick Moore styles himself, as saying that a load of Trotskyists and other leftists had "ditched socialism for the environmentalist bandwagon when the iron curtain fell, and became influential within Greenpeace and similar pressure groups”.

Perry not only appeared to take seriously the claim that a bunch of Trots had taken over the environmental movement, but somehow forgot to mention Moore's long history of attacking the green movement as a paid frontman for a series of environmentally destructive industries, including the GMO industry.

1. Letter to the editor of The Independent (UK)
2. GM problems can be sorted out
—

1. Letter to the editor of The Independent (UK)

We are surprised that Prof Joe Perry failed to disclose in his letter defending GM crops (“GM problems can be sorted out”, 30 March) that he is the chair of the European Food Safety Authority (EFSA) GMO Panel, which is responsible for giving scientific opinions on the safety of GM crops submitted for European approval. His partial and misleading letter is at odds with the supposedly independent and neutral public interest role that EFSA and its panels are mandated to play.

Perry’s claim that there is no evidence of health problems from GM foods is misleading and inappropriate, given his position. He will be aware of a recent statement, published in the scientific literature and supported by 300 researchers, challenging the claimed scientific consensus over GMO safety and highlighting serious problems with contradictory evidence.

And he has failed to make clear that it is not possible to make claims about the effects of GM crops on humans without controlled epidemiological studies – which have never been carried out.

Perry’s contention that problems caused by GM crops can be managed by “proper regulation”, such as Directive 2009/128/EC on the sustainable use of pesticides, is flawed. No European country has formally and systematically implemented the Directive. And every country that cultivates herbicide-tolerant GM crops appears to be plagued with resistant superweeds.

2. GM problems can be sorted out

Letter to the editor of The Independent (UK), published 30 March 2015
http://www.independent.co.uk/voices/letters/letters-the-voters-favourite--none-of-the-above-10144732.html

It is unsurprising that NGOs such as Friends of the Earth, the Soil Association and GM Freeze reacted with such trepidation to your series on GM (letter, 27 March), but their case is full of half-truths.

While it is true that resistance to broad-spectrum herbicides is a real problem in the US, this is due to poor management that could be ameliorated in Europe by proper regulation such as that possible under Directive 2009/128/EC on sustainable use of pesticides.

Despite the indirect adverse effects that GM herbicide-tolerant systems may have, for some crops, on biodiversity such as butterflies and songbirds, many studies have shown how wise regulation can eliminate such effects.

Furthermore, although it is true that GM crops have failed to deliver much benefit to consumers in Europe, the blame for this is at least partly due to NGOs who have fuelled media hysteria. There is simply no evidence that consumption of any approved GM crop causes any health problems to humans or animals.

The letter asked “why does GM continue to get funding and political support”? The answer is the potential for the very innovation and sustainability of which they speak, exemplified by the GM potato currently under development in Norfolk.