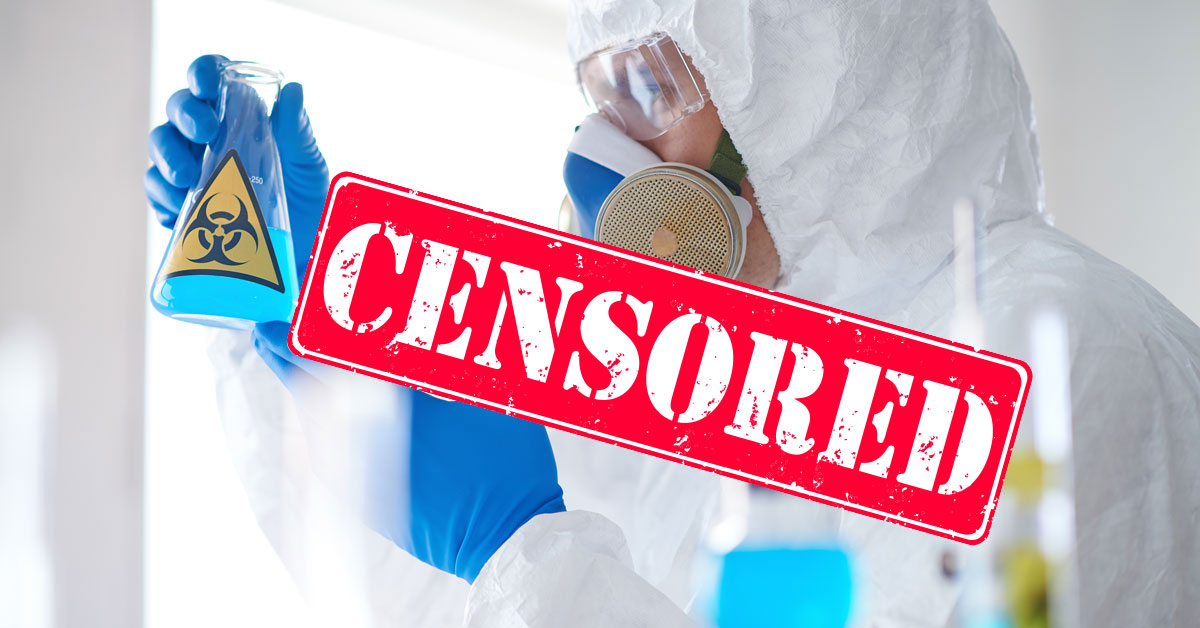 A growing number of scientists think that the virus causing COVID-19 may have been genetically engineered and/or a lab escape – but they can't get their evidence published in journals. Report: Claire Robinson

As evidence builds for the lab-manipulated origin of SARS-CoV-2, the virus that caused the COVID-19 epidemic, scientific journals are running scared of publishing papers that broach this possibility.

The rival theory for the virus's origin is that it is a natural spillover event from wild animals ("zoonosis"). The zoonotic theory has been consistently promoted by the Chinese government, which has been keen to rubbish any attempt to pin culpability on its laboratories, notably the Wuhan Institute of Virology (WIV), which has been the centre of suspicion for any lab escape.

The latest paper to support the lab origin and genetic manipulation theories has been published not in a peer-reviewed journal, but in a magazine. The distinguished scientists Birger Sørensen, Angus Dalgleish and Andres Susrud have published their long-awaited paper on the website of a Norwegian magazine called Minerva.

Minerva has published an accompanying article which reports, "Sørensen and his co-authors present several arguments for why they consider a non-natural origin for the novel coronavirus to be the most logical explanation on how the virus evolved. It is observations on the spike protein* of the SARS-CoV-2 virus that leads Sørensen and his co-authors to believe that the virus has originated in a laboratory."

Sørensen told Minerva, "There are several factors that point towards this. Firstly, this part of the virus is very stable; it mutates very little. That points to this virus as a fully developed, almost perfected virus for infecting humans. Secondly, this indicates that the structure of the virus cannot have evolved naturally. When we compare the novel coronavirus with the one that caused SARS, we see that there are altogether six inserts in this virus that stand out compared to other known SARS viruses."

Sørensen said that several of these changes in the virus are unique, and that they do not exist in other known SARS coronaviruses. "Four of these six changes have the property that they are suited to infect humans. This kind of aggregation of a type of property can be done simply in a laboratory, and helps to substantiate such an origin."

"A certain reluctance" to publish

Sørensen had previously told Minerva that he had encountered "a certain reluctance" on the part of journals to publish the paper – without the journals giving "proper scientific objections".

Former MI6 head Sir Richard Dearlove saw the paper prior to publication and is convinced by it. Commenting on the scientists' difficulties in publishing their work, Dearlove said that one journal "refused it within a week of receiving it, and in the same period accepted for publication two or three Chinese articles that relate to the virus, within 48 hours".

Sørensen thinks that the journals' reluctance is due largely to the fact that a lab origin for the virus is "a very uncomfortable finding, and the production of new scientific articles that can be used to prove such findings has all but ground to a halt. Chinese scientists no longer publish articles that can be used to support such a hypothesis.” He adds, “This quickly becomes a discussion on politics, rather than science. Nobody wants to put forward the inconvenient truth, many scientists are also concerned about their own funding and position if they were to put forward such a controversial hypothesis."

Sørensen and colleagues' experience with scientific publication is far from unique. Other scientists have found a similar "reluctance" on the part of journals to offer a platform for their findings. But it doesn't appear to be due to any weakness in the lab origin theory, which is supported by well credentialed scientists.

Molecular biologist Richard H. Ebright of Rutgers University has been vocal in his view that a large sector of the scientific establishment is strongly motivated to deny any possibility of a lab origin for the virus. He said on Twitter, "For persons who were directly involved in funding, promoting, and/or performing bat coronavirus research and bat coronavirus gain-of-function research at WIV, avoiding a possible finding of culpability for triggering a pandemic is a powerful motivator.

"Guilt, greed, and opportunism are powerful motivators in science, just as in other areas."

It certainly isn't the case that the zoonotic theory is better supported by the evidence. The main evidence for zoonotic origin for the virus is an article published in the journal Nature Medicine, titled "The Proximal Origin of SARS-CoV-2". The authors, Kristian Andersen and colleagues, dismissed out of hand the possibility of a lab origin and human manipulation of the virus, on the claimed basis that any lab-generated virus would have been designed differently, based on their computer predictions.

Commenting on the paper, the virologist Dr Jonathan Latham described the evidence presented for a zoonotic origin as "extremely weak".

Another scientist unconvinced by Andersen and his colleagues' argument was molecular geneticist Dr Michael Antoniou, who sent a letter to Nature Medicine explaining that "although the authors may indeed be correct in how they perceive SARS-CoV-2 to have arisen, the data they present does not exclude the possibility" that it was developed in a laboratory-based process.

Dr Antoniou even described a well known way in which the virus could have been created, involving genetic engineering and selection. But Nature Medicine refused to publish his letter. It was left to the journalist Paolo Barnard to give Dr Antoniou a forum for his views on Italian TV.

Scientist "pissed off" at Nature

Dr Antoniou is not the only scientist who has come up against Nature's reluctance to publish any argument for the possibility of a lab origin. A scientist who identifies himself only as Henri had a similar experience, as he recounted on the website of the scientist (likely a Chinese native) who blogs anonymously as "NerdHasPower", seemingly concealing his identity in order to protect himself from possible retribution by the Chinese authorities.

"NerdHasPower" had argued cogently not only that the virus is a genetically engineered lab creation but that evidence for its natural origin was fabricated. Henri, a proponent of the zoonosis theory, doesn't agree with Nerd's conclusions. But with admirable scientific objectivity, he wrote, "Whilst I am on the side  of 'not lab made' I am also on the side of 'Nature magazine has a responsibility to further investigate possible scientific fraud'."

No doubt because Nature Medicine doesn't accept letters to the editor, Henri wrote to its parent journal Nature, acting as an intermediary for NerdHasPower's arguments, which Nerd could not do himself due to his need to protect his anonymity.

In due course Henri reported back, "The Letter to Nature was rejected outright. I appealed. The appeal failed. I now intend to take the matter up with the Editor-in-Chief." Two days later he wrote, "Radio silence from the Editor-in-Chief and Nature. Consequently, I am pissed off."

"SARS-CoV-2 could come from a lab"

Another scientist who believes that SARS-CoV-2 could have come from a lab is the independent consultant and materials scientist Dr Billy Zhang. Dr Zhang wrote a detailed critique of "The Proximal Origin of SARS-CoV-2" and sent it to Nature Correspondence – which refused to publish it, as Dr Zhang told GMWatch. So Dr Zhang published the article on his LinkedIn site, under the title, "SARS-CoV-2 could come from a lab – a critique of 'The Proximal Origin of SARS-CoV-2' published in Nature Medicine".

In the article, Dr Zhang pointed out that neither Andersen and colleagues' analyses nor the 30 published or preprint articles that the authors reviewed for their paper could rule out the possibility that SARS-CoV-2 was engineered in a lab or that it is a derivative strain of such a lab-manipulated virus.

He added that a team of researchers from the WIV and the University of North Carolina in the US had as long ago as 2015 published a paper in Nature Medicine detailing how they "created in the lab a hybrid pathogenic virus that was highly infectious to humans".

Another example of the extent to which Nature is not tolerating any questioning of the official zoonotic origin narrative unfolded on Twitter.

Nature’s Twitter account tweeted about how visualising SARS-CoV-2 proteins to understand their structures could help stop the pandemic, by disarming them with drugs. When someone replied that another way would be to "stop the scientists making dangerous chimeric viruses", Nature blocked their account. When someone else said they had been blocked too, a molecular geneticist quipped, "This is getting to be like street cred."

Meanwhile several scientific papers putting forward the possibility of a lab origin and/or genetic engineering in the virus's history have languished on pre-print websites for some time. Pre-print websites give scientists a chance to air their findings publicly and obtain feedback from peers prior to approaching a journal. In some cases, journals will proactively approach the authors and offer to put forward the paper for peer review with a view to publishing it.

These papers include a study led by Dr Alina Chan of the Broad Institute, MIT, USA. Dr Chan and colleagues explain that SARS-CoV-2, even at very early stages of its detection in humans, was already highly adapted for human infectivity. In this respect it is different from the earlier SARS virus, SARS-CoV (sometimes now called SARS-CoV-1), which caused a human epidemic in 2003. The earlier SARS-CoV was initially far less well adapted to infecting humans and had to acquire mutations gained though many rounds of infectious cycles to reach peak infectivity. This type of progressive adaptation (mutation and selection) is exactly what is expected to happen in animal-to-human virus disease transmission. The fact that there is no evidence as yet for SARS-COV-2 having adapted in this way casts doubt on the zoonosis theory of the virus’s origin. Dr Chan and colleagues conclude that the possibility of a lab escape "should be considered regardless of how likely or unlikely".

Another study, led by Dr Nikolai Petrovsky at Flinders University in Australia, similarly concludes, "Overall, the data indicates that SARS-CoV-2 is uniquely adapted to infect humans, raising questions as to whether it arose in nature by a rare chance event or whether its origins lie elsewhere." The authors conclude that the possibility cannot be excluded that "SARS-CoV-2 was created by a recombination event that occurred inadvertently or consciously in a laboratory handling coronaviruses, with the new virus then accidentally released into the local human population".

Yet another paper available only in pre-print form, authored by Rossana Segreto of the University of Innsbruck, is baldly titled, "Is considering a genetic manipulation origin for SARS-CoV-2 a conspiracy theory that must be censored?"

Segreto argues, "Genetic manipulation of SARS-CoV-2 may have been carried out in any laboratory in the world with access to the backbone sequence and the necessary equipment. New technologies based on synthetic genetics platforms even allow the reconstruction of viruses based on their genomic sequence, without the need of a natural isolate [of the virus]."

However, she adds, "Unfortunately, theories that consider a possible artificial origin for SARS-CoV-2 are censored by international scientific journals as they seem to support conspiracy theories."

Of course, it's possible that these papers are currently in the process of being published by journals. But we're not holding our breath. The fact that so much scientific evidence of lab origin and genetic engineering is being withheld from the peer-reviewed literature will doubtless contribute to the frequently claimed scientific "consensus" that the virus has a natural origin. But in reality, there is no consensus – just censorship of scientists who support a lab origin theory.