Many column inches have been devoted to Folta – from the front page of the New York Times to Buzzfeed – but here we take a look at some of the visual evidence that helps explain why Folta attracts so much criticism.

Let’s start with the money, in the first room of the gallery.

Exhibit A: Kevin Folta telling legislators he has never had a dime from Monsanto

This short (1 min. 37 second) video is from the address Kevin Folta gave to the Pennsylvania House of Representatives on 6 October 2014. It was given to their Agriculture and Rural Affairs Committee in the run-up to a debate the legislature had scheduled over a bill requiring the mandatory labelling of GMO foods – something the biotech industry strongly opposes.

As always, Folta is keen to emphasize to the Committee his credentials as an “independent scientist” and in particular his complete independence from industry. He tells them how in his outreach work he meets all the time with anti-GMO activists who, “ask how much do you get from Monsanto? And the answer is zero.”

It later emerged, after Folta had to release his email exchanges with the agrochemical industry, that Monsanto had given him an unrestricted grant of $25,000. He got it in August 2014, i.e. two months before he made that declaration in Pennsylvania about getting “zero” from Monsanto.

As you will also see in the video, the slide that Folta is showing the legislators, while he tells them he has never had any money from Monsanto, is about his “outreach program”. And that’s exactly where Folta says the $25,000 went.

According to the New York Times, Folta’s trips to testify in Pennsylvania were also paid for by the industry. In other words, industry were paying for him to go to Pennsylvania to impress on legislators his complete independence from industry.

Exhibit B:  Kevin Folta telling Joe Rogan he has NO connections with Monsanto

The claims he made in Pennsylvania were no one off. Exhibit B is taken from an interview with Joe Rogan, and it shows that a year after he got the Monsanto money he was still proclaiming: “I have nothing to do with Monsanto.” In this video that bogus claim has been turned into a loop by his critics.

Exhibit C: Kevin Folta telling Monsanto how to pay the money so it is not made public

Here is Kevin Folta explaining to Monsanto exactly how to pay the money for his pro-GMO outreach activities so that the money is NOT “publicly noted”.

Exhibit C is taken from the pitch Folta originally made to the company for the $25,000, and it can be found on page 104 of the Folta emails released by the New York Times.

As you can see, he tells the company that by funding the project so that “it is not in a ‘conflict-of-interest' account”, it will not have to be publicly reported. This suggests Folta was intent on not disclosing the funding from the very start .

Folta’s failure to disclose needs to be seen in the context of his long history of not just strongly denying receiving any monies at all from Monsanto, but of ridiculing anyone who suggested otherwise.

Exhibit D was used to satirise those who claimed he was backed by Monsanto. It illustrated an article Folta wrote in 2012 in which he said he had never “received a dime from [Monsanto].”

Folta went on to say, “As a university scientist my funding is all public record, so this may be verified.” But as Exhibit C shows, he advised Monsanto on how to pay him the grant of $25,000 without it being publicly recorded.

Folta didn’t just deny his Monsanto connections before they were exposed but, as Exhibit E shows, he carried on with the denials afterwards. Now he denied ever having meant to hide anything or indeed ever having done anything wrong.

One of those who tried to hold Folta to account on social media was the science writer Emily Jane Willingham. In Twitter exchanges she told him he'd become a “poster boy” for the problem of undisclosed conflicts of interest and that, “You seem to be seeking some kind of loophole for yourself instead of owning the ethics here.”

And when Folta asserted, “I did nothing wrong, said nothing false. I acted as all experts in science act”, Willingham responded, “This assertion disturbs me. For the record, this is *not* how all 'experts in science' act. Good Lord.” 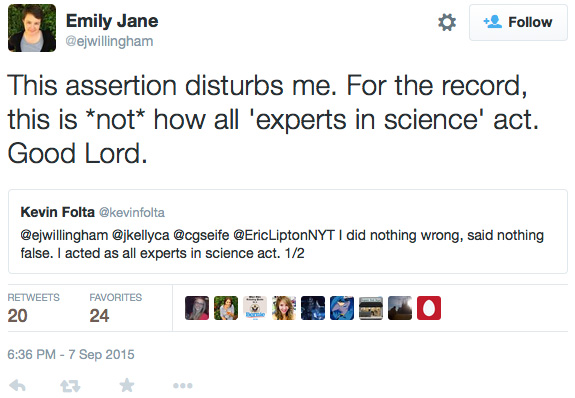 Kevin Folta asserts that GMOs are safe, the science is settled and any debate about them is over. He also asserts that Monsanto’s herbicide Roundup is harmless, and has even publicly drunk it to supposedly demonstrate this. Yet Folta’s assertions are contested by many other scientists and he has a history of false claims and other unethical behaviour.

In a recent article, "Take nobody's word for it – evidence and authority in a world of propaganda", the physicist Jon Butterworth wrote, “Acknowledging uncertainties is vital, owning up to mistakes deserves respect, and outright lies in the face of obvious facts means the perpetrators must be cast out, and never listened to again.”